Representative of the PhD/PostDoc initiative:

Reports from the PhD / PostDoc-Initiative

The goal of the PhD/PostDoc initiative is to represent the interest and perspective of the PhD students and PostDocs working within SFB1129 and to independently decide on their current needs. In addition, we want to offer opportunities to further their academic career and interact with people from different positions within academia.
During the first funding period Andrea Imle continuously represented the PhD/PostDoc initiative. For the current funding period we decided to give more people the opportunity to take over this very interesting representative function by defining a term of one year for each representative.
In 2019 Ines DeCastro (PostDoc; project 20) took over this role followed by Severina Klaus (PhD student; project 18) and currently by Marianne Papagrigorakes (PhD student; project 3). This way, we were able to see different viewpoints and combine perspectives from a wide variety of research fields and career stages. This can be clearly seen throughout the program, which was offered by the initiative, and focused on many different aspects of research and academia. As an example, in 2019, Ines DeCastro organized a 3-day course on Leadership, specifically aimed at people in a more advanced career stage carer and planning to pursue an academic career. In 2020, we organized a more general training session for early-stage scientists that gave perspective on the possibilities that science careers and academia offers.

We continued our lunch talk series with Prof. Dr. Alexis Maizel (Professor for Plant Cell and Developmental Biology) who talked about his experience on the road to a Professor position (W3) in the University of Heidelberg on February 24th, 2022.
In an online talk on March 30, 2022 CIID microscopy expert Dr. Sylvia Olberg talked about her experience to leave and also return to academia in her talk “Changing perspective: Transition from academia to industry and back“.

Continuing despite the difficulties imposed by the pandemic, we organized a series of online seminars with speakers who might not have been able to join in person. During these seminars, professionals talked to us about their careers, choices, options and research.
We started the series with Dr. Susan Kummer, who encouraged us to consider failure and what comes after. In the next seminar, Dr. Britta Nyboer talked to us about her current position in administration of university funding, as a way to stay in academia, but out of the lab. We also discussed with Dr. Lena Steshenko, a senior program officer at EMBO Young Investigator network, about how her work impacts research.
This year’s SFB International Meeting was also a successful online event, with PhD students and PostDocs presenting their work and progress in short presentations, receiving insightful remarks and help in a direct discussion with all groups involved.
Altogether, we managed to adapt and overcome many obstacles and provided the PhD students and PostDocs with different tools and perspectives to help them on their future path. Whether it was structured courses or discussions with experts and colleagues from different fields, with the support of the SFB1129 we have provided a fruitful platform for discussion and networking opportunities for both early and late-stage scientists within the SFB1129.

In 2020 we focused on all the different aspects of science that we sometimes do not see, from the big to the small. We started out strong with two events in February. First, we learned about the publishing world together with Markus Elsner, an editor at Nature Biotechnology who taught us what editors do and how a career in science publishing looks like. It was an engaging and exciting talk giving us many insights into the daily life of an editor.
Then later in the month our colleagues Annica Flemming and Carolina Matos taught us how to integrate science and humanitarian work in a seminar on science and volunteering. We covered both options far away and close to home that might inspire a few of us to reach out and participate ourselves.

Despite the challenges that arouse during spring we forged ahead with great determination and decided to hold the SFB retreat in an online format this year. Many great discussions were held via the online platform and we are excited to have twice as much fun in an in-person kick-off meeting next year.
To end the year on a high note, together with hfp consulting, we organized the interactive online workshop “Career Development for Young Scientists” in December. Together with friends and colleagues from the TRR179 and SPP1923 we spend four exciting sessions in two weeks exploring all the possibilities that science careers have to offer and how to best access them. With our two trainers Yuvalal Liron from the Weizmann Institute of Science and Romain Barrès from the University of Copenhagen, we learned how to sharpen our skills and reflect on how to improve ourselves and make better and more informed decisions in our future. It was a highly enjoyable, informative and helpful course and we will carry the lessons learned with us well into the future.

In 2019 our PhD/PostDoc´s have learned in our seminar series about parallel careers to academia. We have started by a theme that is close to many of us, current module tutors and students’ supervisors: “Teaching”. This exciting and lively seminar was led by Dr Kaufmann (Student Coordinator of Molekular Biotecnologie, Heidelberg University), awarded by her excellence in teaching. A group of us are now participating in her teaching programme, a new adventure that could enhance our CVs.
We have also learned from a former scientist, Dr. Schwarz, what it is to be a publishing editor at Springer. It was an enlightening overview into the publishing world and who knows a possible career for some of us.
With the Heidelberg Alumni Network vice-Director, Ms Friedrich, we have explored some Alumni profiles that could translate into possible connections in many different areas, Consultancy, Pharma Companies etc. Located all over the world this network could be extremely helpful when thinking about moving into a different city.
For the SFB1129 retreat, this year we have organised a coaching session with the “Arc Founder”, Astrid Schrader. Driven by the goal of exploring your full potential at work, we took a journey into understanding what we can bring of our personalities to achieve our aims. Some participant comments: “The workshop provided us with a great opportunity to vocalize our wishes, plans and concerns about our future careers in science.”, “I felt I was in a safe place to talk about our own and each other´s current career problems and learned tricks for having a happier work life”, “It was a good opportunity to meet and discuss with other members of the SFB1129 that have similar issues”.

To complete this year we are running three afternoon sessions focused on “Leadership” tailored for PostDocs and final year PhD students that have in mind a transition to Group Leader positions or other leadership roles in parallel careers.

To make science even more fun …

The primary task of the PhD/PostDoc initiative is to get the topics of PhD students and PostDocs on the agenda of the SFB committee in order to make a positive change. But what can such a positive change be? Just because of the presence of a PhD/PostDoc initiative there will not be more successful experiments. But what if science would be more fun? The so-called “fun-theory” summarizes the thought that something as simple as fun is the easiest way to change people’s behaviour for the better. Diverse projects have adapted this principle for example to make recycling more attractive or to use the stairs instead of the escalator (www.thefuntheory.com). Could we also apply the “fun principle” to science within the SFB1129?

The question was, if people would more likely join a seminar and be active in a scientific discussion if it was more fun. We therefore started the “Think & Drink” seminars. To these seminars people can come with a question, they would like to discuss, and gather with others in a relaxed atmosphere without PIs. No presentation is required, but with snacks and drinks, students and PostDocs can discuss science or other questions of the lab life. After initial struggles when to have these meetings, we now have it once a month on Thursday afternoons at 5 pm – alternating with the official SFB1129 seminars.

Another project of the PhD/PostDoc initiative was to organize a VIP speaker seminar. Nobel Laureate Stefan Hell came for a round table discussion with PhD students and PostDocs. In order to enable discussions, the number of participants was limited to 25. In a relaxed atmosphere with food and drinks, Stefan Hell gave private insights into his scientific career and the questions that move him. It was an interesting discussion about ups and downs of the scientific community, the struggles for discoveries and the inspiration and satisfaction a pursued idea can provide.

The annual retreat is meant to foster scientific discussion between the groups. As in the previous year, PhD students and PostDocs could discuss their science in a poster session. Additionally this year the retreat was preceded by a whole session organized by the PhD/PostDoc initiative. The morning started with an Impulse talk by two young EMBL scientists, Lars Steinmetz and Judith Zaugg. They gave insight into their careers and turning points in their lives, things that worked out, but they included also detours and experiences, they would have loved to miss. The presentation evoked a vivid discussion and both speakers were very open to diverse questions.

What followed was a bit of an experiment. We went outside to be active. The overall question was, if the whole retreat would be more fun if people would get to know each other better, if the idea of collaborating would become concrete and tangible. We therefore had a team event in form of a chain reaction. Similar to domino day, an initial impulse had to be propagated and amplified over some distance up to the final confetti canon. 35 PhD students and PostDocs were assigned by chance into 7 groups. Within these groups they built several stations to spread the impulse and then to transmit it to the next group. Diverse material could be used to build the chain reaction: balls, rockers and tunnels and the classic dominoes up to electric equipment such as hairdryers or record players. The building process started communication within the group and neighbouring groups. Participants described the chain reaction as a “great opportunity for students to get to know each other and break the ice” and appreciated the chance to do something practically before all the theory. In general, participants said they would appreciate a recurrence of a similar event and would recommend it for other SFBs and Transregios. It was great to see how doing something together “just for fun” could release a lot of positive energy. Everyone was involved in an activity where the overall effect is more than the sum of its individual parts. And that is what an SFB is all about in the end.

Impressions from the team event at the Retreat in July 2016: 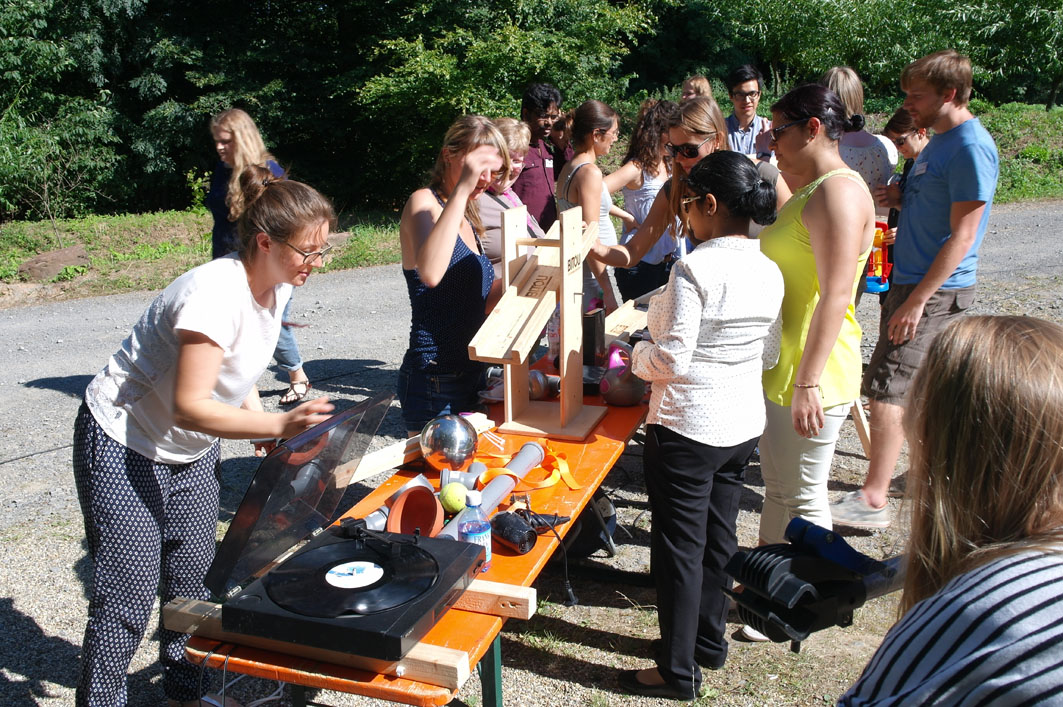 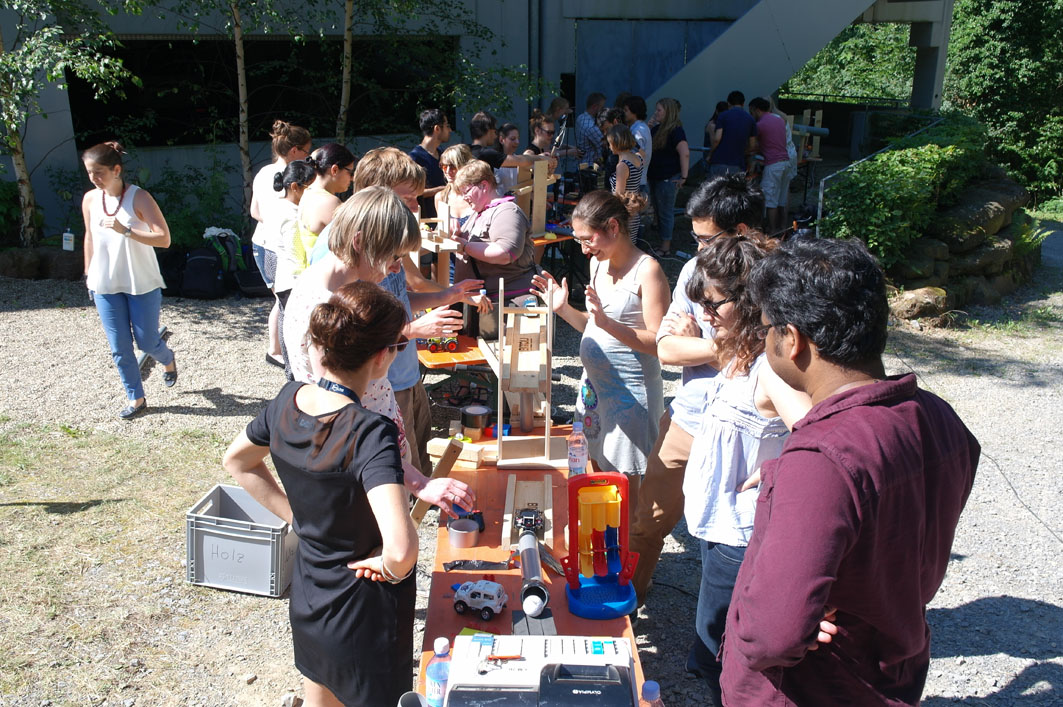 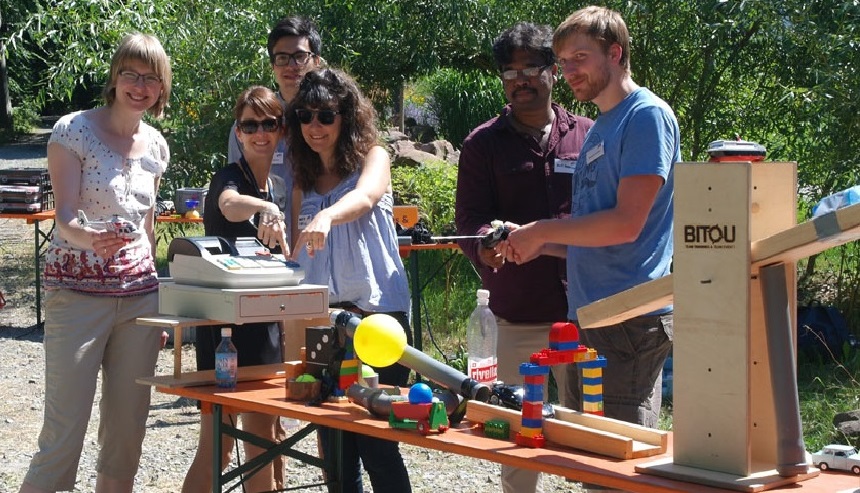 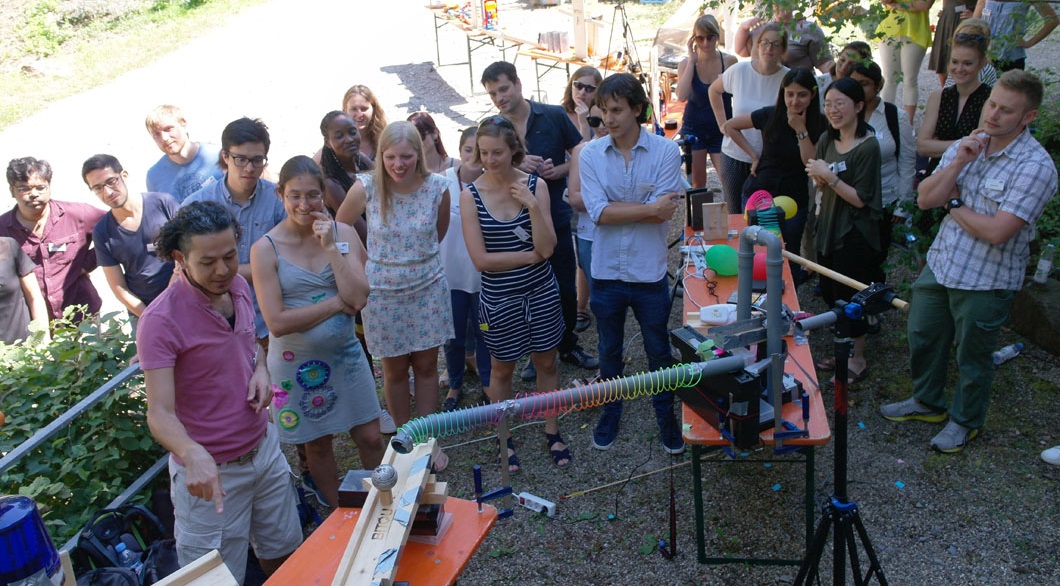