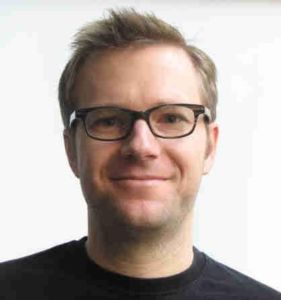 The malaria-causing parasite P. falciparum proliferates in the red blood cells of a human host through an unusual cell cycle. During this cell cycle, multinucleated cells are formed and although these nuclei are in very close proximity, they multiply asynchronously. During the last funding period, we combined genetics, live-cell imaging, and mathematical modelling and found that these asynchronous nuclear cycles balance limited resources with fast parasite proliferation. We further investigated the function of a central regulator of this unusual cell cycle, the kinase PfCRK4. Using proteomic tools, we identified new molecular players and expanded the functions assigned to PfCRK4. During this funding period, we will further investigate the signaling cascade that converges on PfCRK4 and characterize the limiting resources that affect parasite proliferation.

Malaria remains to be the most important vector-borne human disease with an estimated 240 million cases in 2020. In the same year, more than 600.000 cases were fatal, mainly children under the age of five. The most severe form of human malaria is caused by the single-celled eukaryote Plasmodium falciparum, which alone is responsible for over 90 % of all malaria cases. Despite some progress in curbing the disease since the year 2000, the number of cases and the mortality increased again in recent years. In addition, resistance to the first-line treatment, artemisinin, is emerging in all endemic regions.

P. falciparum proliferates inside host erythrocytes, which is responsible for all clinical symptoms of malaria and disease severity is intimately linked to parasite burden. The parasite proliferates via an unusual cell cycle called schizogony, during which the nuclei divide several times, forming a multinucleated stage that can harbor up to 30 nuclei. Multinucleated cells can be found on all branches of the eukaryotic tree of life and when two or more nuclei reside in the same cytoplasm, they usually progress synchronously through the cell cycle. However, P. falciparum nuclei divide asynchronously despite residing in the same cytoplasm.

Within the second funding period, we achieved three key biological breakthroughs in understanding parasite proliferation and disease severity. Firstly, we discovered that during the dry season in endemic countries, when transmitting mosquitoes are absent, P. falciparum circulate longer in the peripheral blood before they adhere to endothelial cells. Although parasite proliferation is not altered during the dry season, this increased circulation leads to persistent and asymptomatic infections. Secondly, we uncovered that the parasites unusual cell cycle with asynchronously multiplying nuclei is tailored to balance limited resources with rapid parasite proliferation. Thirdly, we found that the major S-phase promoter PfCRK4 is also critical for the reorganization of nuclear microtubules, rendering PfCRK4 the key regulator of nuclear-cycle progression. We also developed a nuclear cycle sensor system for long-term live-cell imaging that allows us to follow individual nuclei as they progress through nuclear multiplication. 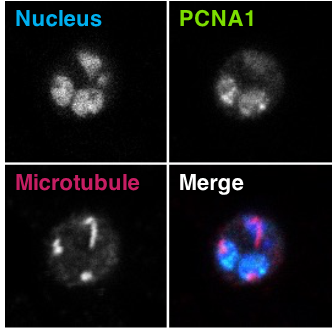 Single Z-section of a fixed and antibody-stained P. falciparum
parasite in the multi-nuclei stage during schizogony, acquired
using the Abberior Instrument for STED/RESOLFT of the IDIP.

Video of a Z-projection of a live P. falciparum parasite undergoing schizogony,
imaged at the Perkin Elmer Spinning Disk microscope at the IDIP.

During the third funding period, we will (i) further elucidate the PfCRK4 signaling cascade, which orchestrates nuclear-cycle progression and (ii) uncover factors that affect the speed of DNA replication and, thus, proliferation speed in P. falciparum blood stages.

Using transgenic parasites, we will further characterize the interaction of PfCRK4 and its putative upstream regulator casein kinase 2 (PfCK2). We will also reveal the biological function of effector proteins of PfCRK4. Our nuclear cycle sensor system will be used to interrogate how different perturbations affect the speed of DNA replication, which will inform on environmental and parasite factors that influence parasite proliferation. Within SFB1129, we will work closely with Schwarz/Lanzer, Bartenschlager/Höfer, Frischknecht/Spatz, Funaya/Schwab, Ingham, and Hamprecht/Rohr. 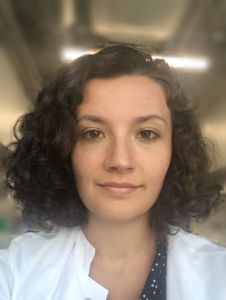